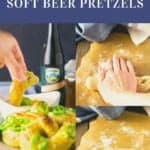 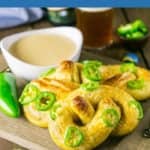 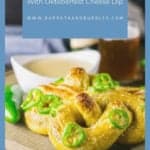 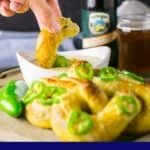 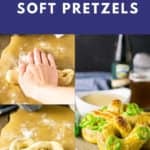 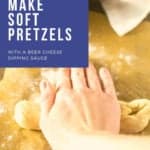 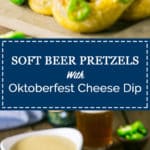 We have officially achieved the beer trifecta: buttery soft beer pretzels with an Oktoberfest cheese dip and a beer on the side to wash it all down. Is there a trio that could make us beer nerds happier? I honestly don't think so. Whenever Matt and I find ourselves at a beer bar with soft pretzels on the menu, neither of us can resist. Pretzels are delicious with just about any beer out there, and this recipe proves it.

Even if you don't love beer, I bet you'll still enjoy these soft beer pretzels. The malt characteristics from the beer give the pretzels a subtle bready sweetness, and the crust offers just enough bite to contrast the pillowy, light insides without being hard and dry like some of those terrible stadium pretzels. Whether or not you're a beer nerd, you'll love these pretzels. Promise.

Making dough can seem intimidating, but this dough is doable for beginners and expert bread-makers alike. Unlike some doughs, this pretzel dough is easy to handle and doesn't stick to everything, which can certainly be frustrating.

For both the pretzel and cheese dip, I used an Oktoberfest because it's in season and has that aforementioned bread-like quality; however, if you're making these soft beer pretzels during another time of year, an amber ale works well. The Oktoberfest is definitely noticeable in the cheese sauce, which I obviously love. However, if you're serving this to anyone who isn't a big beer fan, you can use a pilsner for a lighter beer flavor.

Let's start baking. Heat up the beer and water until it's about 100-110 degrees or whatever temperature your yeast package says. You can heat the mixture in the microwave but do so in small increments. If the mixture is too hot, it can kill the yeast. That said, if the mixture gets too hot, give it a few minutes to cool and you'll be good to go. An instant-read thermometer is perfect for ensuring the mixture is the right temperature.

In a mixing bowl, pour the warm beer mixture over a touch of sugar and salt, sprinkle the yeast on top and let it sit for about five minutes. Don't worry about stirring in the yeast. As the yeast sits, it'll turn foamy, and you can then add in flour and melted butter.

If you have a stand mixer, the dough hook does a fantastic job kneading, or you can easily knead by hand. Simply stir together the ingredients in the mixing bowl until it forms a dough ball and then turn it out onto a lightly floured counter. Fold the ball in half and use the heels of your hands to press the folded ball down. Give the dough ball a quarter turn and repeat until it's smooth and elastic like the photo below. 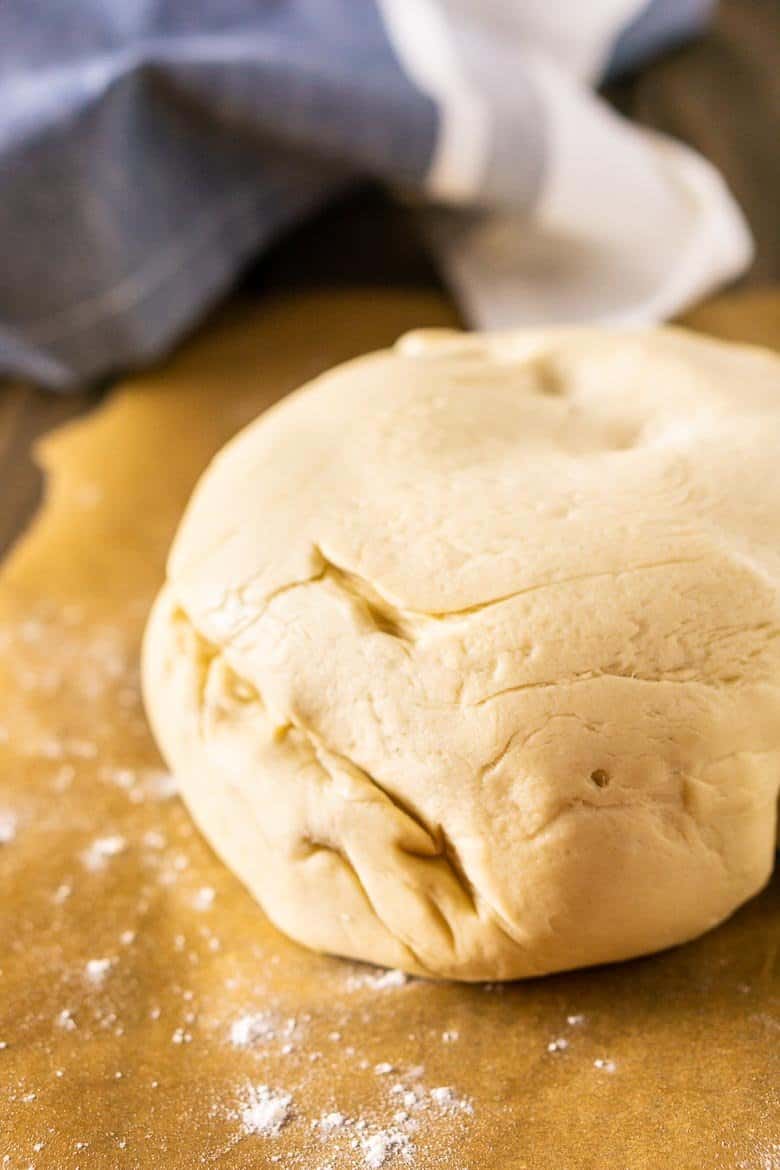 Now cover the dough and allow it to double in size for about an hour. Once the dough doubles, we break it into about eight pieces and shape the pretzels, which is super fun because we get to pretend we're kids again. Remember making snakes out of Play-Doh? The process is a lot like that. Roll the dough under the palm of your hand until it makes a "snake" about 18 inches long.

Turn that snake into a U shape and fold the ends like so. 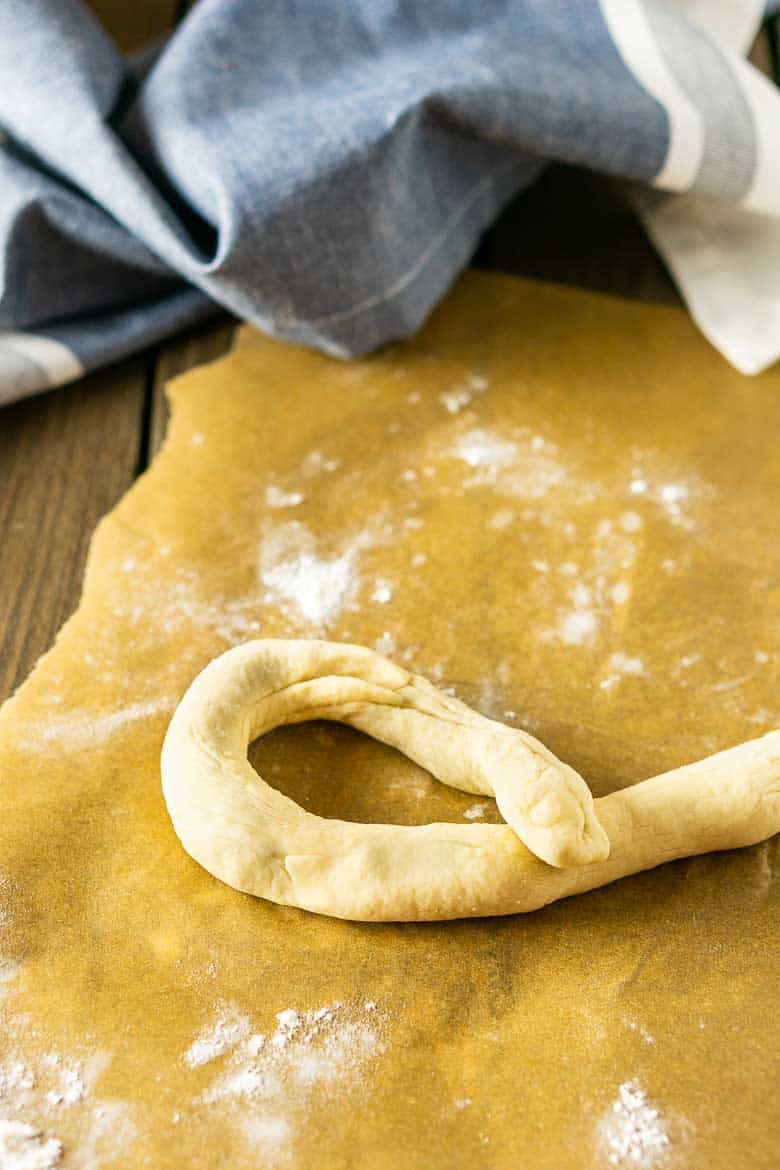 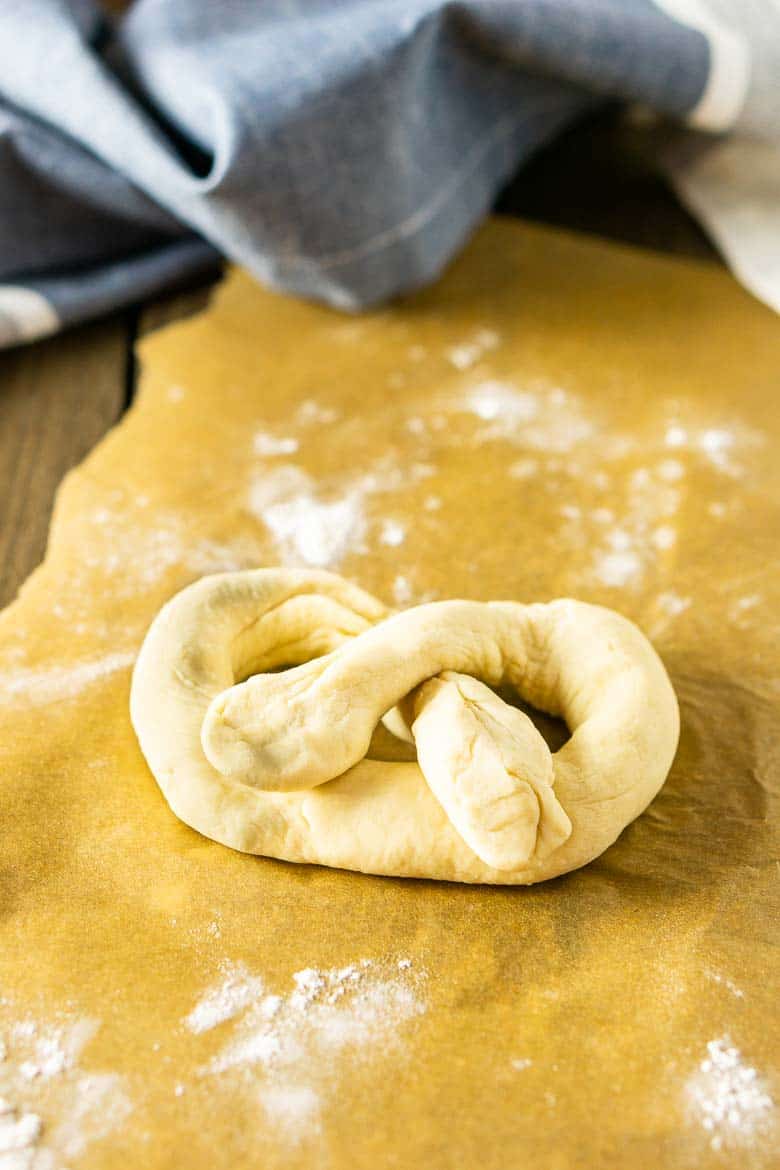 And just like that, you have a perfectly shaped pretzel. See how fun that was? We now carefully drop the pretzels into boiling water and baking soda to give the pretzels that signature crust, brush them with an egg wash, sprinkle with salt and bake them. I was feeling a little spicy, so I added fresh jalapeno slices to mine. Plus, I love that pop of green.

Bonus: While this step is optional, I'm a firm believer in lightly brushing the finished pretzels with melted butter for obvious reasons.

The cheese dip is also a breeze. We make a roux by whisking together equal parts flour and butter. After a few minutes, add the beer, milk and a few seasonings. Let the mixture simmer, add the cheese until it melts and you're ready for dipping.

Any of the beers I mentioned above --- Oktoberfest, amber ale or pilsner --- all go well with these pretzels. These three beer styles match the nutty notes in the cheese sauce and naturally mimic the bread's subtle sweetness. There's also enough malt to balance the jalapeno slices if you decide to add a little heat.

When wine strikes your fancy, a chardonnay is perfect. Chardonnay's buttery notes are practically made for soft pretzels, and the wine's silky texture works well with the pillowy dough.

Cooking With Beer Is Fun, Huh?

These soft beer pretzels with an Oktoberfest cheese dip are a beer lover's dream. They're easy to make and super delicious.