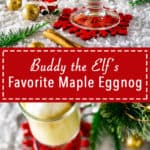 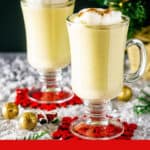 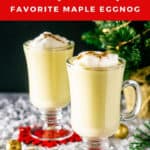 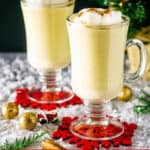 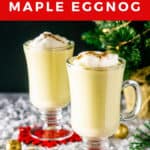 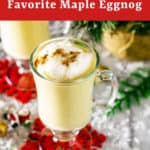 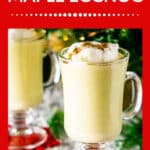 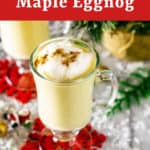 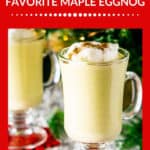 "The best way to spread Christmas cheer is singing loud for all to hear" --- or serving Buddy the Elf's favorite maple eggnog, which is sure to give you all the holiday vibes in no time. While most eggnog recipes are sweetened with sugar, this recipe uses maple syrup as a nod to Buddy's favorite food group. The maple syrup gives this eggnog a warmth and richness that make for the most decadent holiday cocktail.

Besides being delicious, I'm especially excited about this homemade maple eggnog because "Elf"is my all-time favorite Christmas movie. "Elf" came out when I was in college, so I went to go see it with two of my close friends, Denise and Dustin. The three of us literally did not stop laughing the entire time. We were in stitches after one joke, and as soon as we started to settle down, the next joke popped up, and we were back to those hearty belly laughs.

To this day, seeing "Elf" was one of my most memorable trips to the movies, which may seem weird. Usually, it seems like people remember "Star Wars" or something iconic like that as their pinnacle movie-going experience, but for me, that movie was a classic Will Ferrell flick. Watching "Elf" always takes me back to that happy memory, and no matter how many times I've seen it, I still crack up from beginning to end.

Now let's turn on some Christmas music and make a batch of this delicious maple eggnog.

To start, we bring whole milk, heavy cream, maple syrup, vanilla extract, cinnamon sticks, cloves, nutmeg and a pinch of salt to a simmer. As I've mentioned in other recipes, we don't want to boil a cream mixture when milk is involved because the proteins could potentially separate. A nice simmer will do, and then we let the mixture sit for just a few minutes to slightly cool and allow the spices to continue infusing.

If you'd like, you can also add liquor for a boozy eggnog before chilling, or you can let people add the liquor of their choice when serving, which makes it kid-friendly. Plus, it's fun to play around with different liquors. Last year, Matt and I made an eggnog flight where we tried our eggnog with six different liquors and liqueurs: bourbon, my vanilla bean-orange-infused bourbon, spiced rum, brandy, Kahlua and Bailey's. We loved every option, but the orange-vanilla bean-infused bourbon was my favorite while Matt was partial to the Kahlua.

But sometimes it's easier to dump in the booze and not worry about mixing while serving. I've prepared this eggnog both ways, so the choice is completely up to you.

Before serving, I also like to whip up some egg whites and fold them into the eggnog. The whipped egg whites add some nice body to the eggnog, or they work well for a frothy topping. Now pop on "Elf," laugh the night away and enjoy a delicious cup of Buddy the Elf's favorite maple eggnog.

If you ask Buddy, I'm sure he'd recommend his famous candy-covered, maple syrup-drenched spaghetti. I love Buddy, but I have to pass. Instead, this maple eggnog is perfect with a fudgy, rich brownie or big slice of gingerbread. The creamy, milky body perfectly washes down a thick brownie, and that sweet maple flavor is the perfect backbone to gingerbread spices. 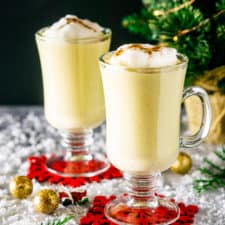 “The best way to spread Christmas cheer is singing loud for all to hear” — or serving Buddy the Elf’s favorite maple eggnog, which is sure to give you all the holiday vibes in no time. While most eggnog recipes are sweetened with sugar, this recipe uses maple syrup as a nod to Buddy’s favorite food group. The maple syrup gives this eggnog a warmth and richness that make for the most decadent holiday cocktail.
5 from 34 votes
Print Pin Rate
Course: Cocktails
Cuisine: American
Prep Time: 15 minutes
Cook Time: 10 minutes
Total Time: 25 minutes
Servings: 8 servings
Calories: 389kcal
Author: Amanda McGrory-Dixon